The first calendar month of the Major League Baseball season is officially in the books, and it is never too early to look at the newest updated playoff projections. At FanGraphs, playoff odds are recalculated every day, along with an updated prediction for every team’s record at the end of the season.

Since the start of the season, no team’s playoff odds had increased more than the Milwaukee Brewers. Milwaukee’s playoff chances have risen from 42.2% to 69% and have a ton of momentum heading into this week after taking three of four games from the defending champion Dodgers. Conversely, the Minnesota Twins’ playoff chances have plummeted from 63.3% at the start of the season to 31.4%. The Twins enter this week with the second-worst winning percentage in the American League and are buried in fourth place in the AL Central standings.

Which one of these teams makes our column today?

Though Minnesota has not played anywhere close to their projected potential, this is a week where they could get some positive momentum going. Their next seven games are against the Texas Rangers and Detroit Tigers, who rank in the bottom three alongside them in the American League in terms of winning percentage.

Twins starter Kenta Maeda (1-2, 6.56 ERA) has not pitched anything like the ace the team expected him to be when he was named the Opening Day starter. Maeda has allowed 12 earned runs in his last 8.2 innings. Both of those were road starts at Oakland and Cleveland, but Maeda has much better numbers at home at Target Field, albeit in a small sample size. In six career starts at Target Field, he is 3-1 with a 2.17 ERA. In addition, his strikeout-to-walk ratio of almost 6:1 there is his best at any ballpark.

One cannot pin Minnesota’s slow start on Byron Buxton or Nelson Cruz. Per Baseball-Reference, Buxton’s WAR of 2.4 leads all players in baseball. In addition, Nelson Cruz entered Sunday ranked in the top ten in the league with a 1.049 OPS. 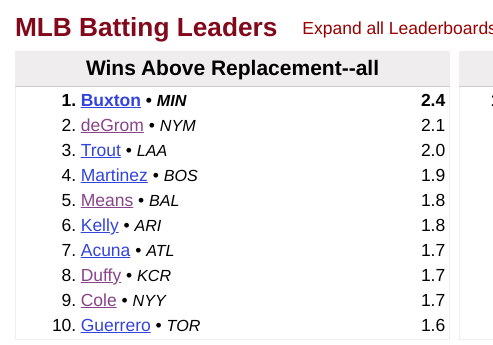 Minnesota has a 2-6 record in one-run games and is 0-5 in extra-inning games. With some positive regression to the mean, the Twins should start to climb up the standings, starting tonight in what would be their fifth straight win against Texas.

Speaking of FanGraphs’ playoff odds, Kansas City’s chances are still somewhat muted (20.7% chance) despite being in first place in the AL Central through 26 games. They continue to get overlooked by oddsmakers as well, as they have been underdogs in 14 of their 26 games so far.

Cleveland’s Aaron Civale (4-0, 2.94 ERA) is one of 11 MLB pitchers with at least four wins, and only six of them are undefeated with that many wins. Some regression is coming for Civale, as evidenced by his seven runs allowed over his last 13 innings. Civale is coming off a start where he allowed a season-high eight hits to the Twins, and he allowed four runs in his only career start against the Royals.

Kansas City’s Jakob Junis (1-1, 3.47 ERA) struck out a season-high nine batters in his last start against the Pirates. He has allowed two runs or less in three of his four starts, and he has held current Indians to a .227 BA (22-for-97) and .330 slugging percentage in 108 combined career at-bats.

Kansas City is 8-5 at home this year and 3-2 as home underdogs. In addition, the Royals are 4-1 in their last five meetings with the Indians. Thus, we are getting great value at plus odds on them in their home series opener against Cleveland.

Oakland’s 13-game winning streak seems like ages ago, considering they are just 5-5 in their last ten games. Their recent mediocre play is why their moneyline odds are not steeper in their series opener with the Toronto Blue Jays, especially considering that Toronto had to make a cross-country flight for this matchup.

Blue Jays starter Steven Matz (4-1, 4.00 ERA) had won his first four starts before getting tagged for six earned runs on eight hits in 3.2 innings in his last start against the Nationals. The A’s rank in the top ten in the league in OPS versus left-handed pitching, so Matz could be in for a second consecutive tough outing.

Matz is opposed by Oakland’s Frankie Montas (2-2, 6.20 ERA), whose ERA leaves something to be desired. However, since a rough first outing against the Dodgers, Montas has allowed three runs or fewer in three of his last four starts. His 9.24 ERA at home is unsustainable, especially since his career home ERA of 4.12 is more than a half-run lower than his road ERA.

Whether you’re new to sports betting or a betting pro, our Sports Betting Strategy and Advice page is for you. You can get started with our 101 section — including 10 Sports Betting Tips for Beginners — or head to more advanced strategy — like Key Numbers When Betting Against the Spread — to learn more.

Mike Spector is a featured writer at BettingPros. For more from Mike, check out his archive and follow him @MikeSpector01.