As we head into the final weekend of games before the All-Star break, ten of the 15 series played over the weekend will be between divisional opponents. The two most high-profile divisional matchups are between the Blue Jays-Rays and Brewers-Reds, as each looks to put themselves in a better position before the trade deadline.

However, the series of the weekend is between the Yankees and Astros, who meet for the second series (and first in Houston) since the cheating scandal. The sign-stealing scandal seems like a distant memory with MLB’s new foreign substance policy now implemented. Two of the “poster boys” for that scandal are New York’s Gerrit Cole and Aroldis Chapman, who have not appeared to be the same dominant pitchers they were earlier in the year.

Do any of these games make today’s column?

The Chicago Cubs accomplished one thing in their recent series against the Philadelphia Phillies by ending their 11-game losing streak. Other than that, their return to Wrigley after a load road trip was disappointing, as they were outscored 31-13 in three losses. Regardless of the starting pitching matchup, the Cubs are in free-fall mode, and do not deserve to be this big of favorites against anyone.

Chicago turns to Kyle Hendricks (10-4, 3.83), who leads all Cubs starters in IP, ERA, and WAR. Hendricks has not lost any of his last ten starts, as his last loss came back on May 9 against the Pirates. However, as well as Hendricks has pitched, the Cubs are 0-2 in his previous two starts. He has allowed five earned runs in his last 12 innings against the Reds and Brewers. He last faced the Cardinals in a June 12 home start, earning the win after holding St. Louis to two runs on three hits over six innings. However, two of the hits allowed were solo home runs, and with more traffic on the bases today, the Cardinals are in a position to do more damage. Hendricks only struck out two batters in that start, suggesting the Cardinals see Hendricks better than the stats make it appear.

St. Louis’s Wade LeBlanc (0-1, 4.24) is appearing in his 13th game (fourth start) but has allowed just one earned run on seven hits in his last ten innings. He needs to be careful with Cubs slugger Anthony Rizzo, who has homered three times off him in six career at-bats. However, Rizzo has just two RBIs in his last 15 games, representing all the Cubs’ offensive struggles recently. With fellow teammates Javier Baez and Kris Bryant (hamstring) still listed as day-to-day, an already under-performing Cubs lineup does not look fearsome.

Though Chicago has won their last four home games against St. Louis, the Cardinals are coming off an off day and are 6-4 in their last ten games. There is too much value on the underdogs to pass up.

The Chicago White Sox have been ravaged by injuries to their lineup, as Yasmani Grandal’s injury now means five players from their projected starting lineup are currently on the IL. However, that has not stopped Chicago from increasing their lead in the AL Central, as no other team is more than one game over .500. Despite their injuries, the White Sox have benefited from a soft schedule that has seen them play three of their last 14 games against teams with a winning record. Additionally, their offense has not suffered, averaging 5.9 runs in that span, and they should once again be able to flex their muscles against the American League’s worst team.

Baltimore’s Jorge Lopez (2-11, 6.02) has allowed current (healthy) White Sox to hit a combined .395 and slug .791 against him. Five White Sox are hitting .375 or better against Lopez, and matching their recent six-run average appears possible despite an injury-plagued lineup. The White Sox counter with a struggling Dallas Keuchel (6-3, 4.48), who has a 5.35 ERA, .290 OBA, and 1.60 WHIP in eight road starts this year. Keuchel was tagged for four runs (three home runs) in five innings in a May 29 home start against Baltimore, and the Orioles could see a similar power surge tonight in the hitter-friendly Camden Yards.

The over is 5-0 in Keuchel’s last five starts against teams with a losing record and is 9-4-1 in the previous 14 meetings between these teams in Baltimore. Another high-scoring game should be in store tonight.

There was a time when betting the over in a game started by Gerrit Cole was considered blasphemous. However, his recent struggles have been well-documented ever since MLB’s crackdown on pitchers using foreign substances. This graphic was taken from a June 8 article on cbssports.com that shows how much Cole’s spin rate has gone down since the start of the season. 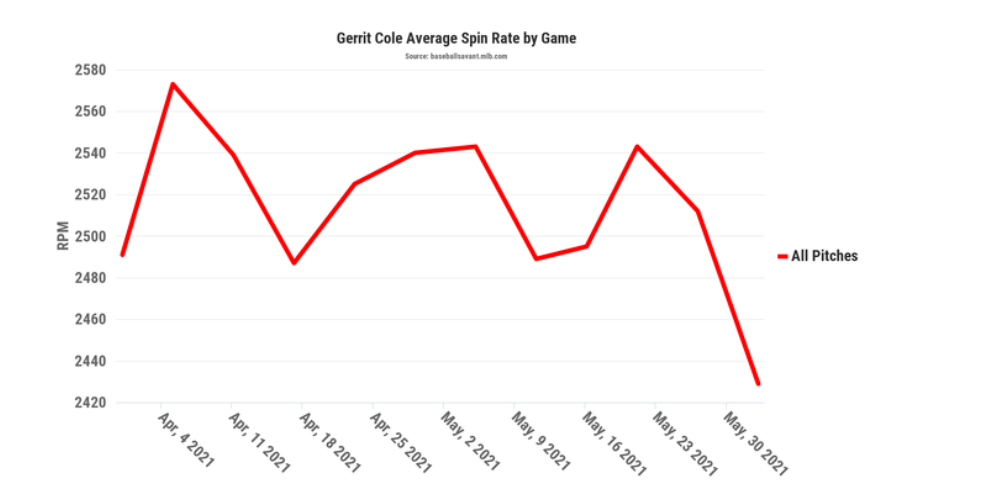 Cole (8-4, 2.91) has allowed nine earned runs in his last 8.1 innings, despite one of those starts coming against the second-worst offensive team (Mets) in baseball. In addition, Cole has not had more than six strikeouts in a game in his last four starts after exceeding that total in nine of his first ten. Houston’s Jake Odorizzi (3-3, 3.70) has pitched much better of late, with a 2.16 ERA in his last seven outings. However, he is 7-9 with a 4.71 ERA in 18 career appearances (17 starts) against the Yankees, including an 8.10 ERA in his most recent two starts against them in 2019.

The over is 3-0-1 in the last four meetings between these teams. And with much more confidence in Houston’s ability to score runs off of this version of Cole, the over is a no-brainer tonight.

Whether you’re new to sports betting or a betting pro, our Sports Betting Strategy and Advice page is for you. You can get started with our 101 section — including 10 Sports Betting Tips for Beginners — or head to more advanced strategy — like Key Numbers When Betting Against the Spread — to learn more.

Mike Spector is a featured writer at BettingPros. For more from Mike, check out his archive and follow him @MikeSpector01.