Over the next several weeks, we’ll be providing comprehensive betting previews for every major event ahead of the 2020 Summer Games in Tokyo, which will run from July 23 – August 8. This edition focuses on the volleyball competition, which will be held July 24 – August 8 at Ariake Arena.

Volleyball made its Olympic debut back in 1964 at the very same venue the Summer Games will be held this year: Tokyo.

On the men’s side, the Brazilians will look to defend their 2016 Gold Medal, but the favorite is Poland – a country that failed to medal in the last competition. Italy took home Silver in 2016, and the United States captured Bronze, but upstart countries France and Russia are looking to keep the Italians and Americans off the podium.

View the top deposit bonuses and promo codes for each sportsbook >> 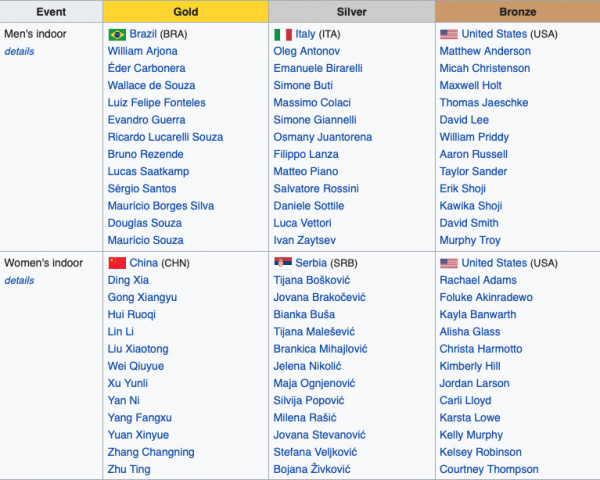 Two reasons. First, there is a lot of competition among the favorites, and it makes for exciting group play and extremely intense matches in the elimination rounds. On the men’s side, five countries have +500 or better odds. In the women’s bracket, four countries are +320 or better. There’s a lot of value on the board and a real chance to hit plus-money winners.

Secondly, there’s no clear-cut, runaway winner in either the men’s or women’s field. There’s no one dominant country that is predicted to and wins every Olympics. There will be a ton of exciting matches, thus plenty of wagering chances. Neither of the defending Gold medalists are favored to repeat, and half of the medaling countries from 2016 aren’t in the top three of betting odds in their respective fields.

5 Things You Absolutely Need to Know

Both the women’s (USA) and men’s (Brazil) champions from 2016 finished in fourth place in group play and rallied to win three in a row, including the Gold Medal game. In 2012, Brazil (women) finished fourth in pool play as well, and the men’s champion (Russia) finished third.
The ‘Group of Death’ on both the men’s and women’s sides could provide value on longshots, especially if the favorites beat each other up in pool play. Brazil, Russia, USA, and France are all in the same men’s group and represent four of the five top betting favorites. Poland, the odds-on favorite, avoids the next four best countries. The USA and China, the two favorites in the women’s field, also are ticketed for the same group.
Foluke Akinradewo-Gunderson, one of the US Women’s top players, is back for her third Olympics and is seeking her first Gold. The US had a great chance to capture Gold in 2016, but an injury to Akinradewo-Gunderson in the elimination round hampered their run.
The best player in the men’s field is Poland’s Wilfredo Leon. He was named ‘Best Spiker’ in 2019 and is referred to as the ‘Cristiano Ronaldo of men’s volleyball. He’s the biggest x-factor not only for favorite Poland but perhaps on the entire men’s side. He’s got the ability to completely take over a match with his vertical leap and size.
Zhu Ting is the best player in the women’s field and quite possibly the best player in the entire Olympic field – men or women. She’s captured 13 MVPs in all levels of competition and was a driving force behind China’s 2016 Gold. Despite being in the USA’s group, China should advance. If Ting is playing her best, very few countries are equipped to combat her.

Poland Men (+200): It’s not my M.O. to go after the top favorite on the board, but this one is too hard to pass up. These odds, +200, don’t really offer a ton of value, but it’s still a chance to double your money on an absolute powerhouse who also happens to have the best player in the field – by far. After not medaling in 2016, Poland will be determined this time around. Plus, their group isn’t a difficult one, and they should come out unscathed.

Serbia Women (+320): The Serbians are hiding in the weeds here. They’re +320 but the fourth-heaviest favorite. The next closest team is Brazil at +1200, and to me, that means Serbia is every bit as able to capture Gold as any of the top four. Bettors are probably ignoring this team as the fourth of four teams at the top, but they won Silver in 2016 and not only have experience in the title match but have the motivation to get over the hump.

USA Men (+500): Perhaps a little home-country bias, but the American men should absolutely not be behind four other countries on the men’s side. From that perspective alone, there’s immense value on Team USA. They’re another team who medaled in 2016 that is seemingly getting disrespected this time around. They’re in the Group of Death, but I think the intense competition will prepare them to battle in the elimination matches.

Italy Men (+1000): I don’t think Italy should have top-two odds or anything, despite winning Silver in 2016, but +1000 is a gift. They avoided the Group of Death, and if they lose to Poland in pool play – which they’re expected to – these odds will get even better. I don’t mind a pre-tournament bet on the Italians, but I’ll be waiting for this line to get even juicier.

France Men (+500): France is technically bucketed with the ‘favorites, but they’re one of the four top teams in the Group of Death. Because of that, I think the French team could drop a few early matches, and if so, their Gold Medal price would skyrocket. Another team I won’t be taking pre-tournament, but one I’ll be looking to pounce on if they drop the first match or end up 1-2.

Brazil Women (+1200): The Brazilian women are one of just five countries ever to win the women’s Gold in volleyball, so they’re a country that knows how to build a team and navigate the field. I think this is their weakest roster in a while, but if any team takes them lightly in an elimination match, Brazil will exploit it. This is a really strong price on a country with strong pedigree.

Canada Men (+6000): There’s a steep drop-off on the men’s side after the top six or so teams, but Canada and Argentina are the two who I think can make a bit of noise. I’m going with the Canadians here because their group is much easier to navigate than the Argentinians’.

Turkey Women (+3000): Turkey is undervalued here, but they’re in the stronger of the two groups. If they can find a way to advance despite being matched up with China, USA, and Italy, they have a legitimate shot of causing a few upsets.

Japan Women (+5000): The Japanese team has longer odds than Turkey, but they shouldn’t be this far behind. Japan is in the easier of the two pool play groups and have a legitimate shot at getting to the elimination round without the three favorites in their way. Plus, they’re in their home country, and despite the fan restrictions, will be much more familiar with the surroundings.

Men’s event: I think Poland is going to win this thing, but at just +200, it’s hard to make them my best bet. I would attack this one of two ways. The first is my preferred way, and it’s to place a half-unit on Poland to win Gold (+200) and a half-unit on Team USA to medal. Odds haven’t been posted beyond Gold futures, but USA to medal should still be plus-money, and probably right around the same price we’re getting Poland to win Gold at. The second way is to take Team USA at +500 to win the gold. I’m placing a little bit of spare change on that one as well.

Women’s event: China has the best player – man or woman – in the entire field. They’re also reigning Gold medalists, but not the odds-on favorites in Tokyo. I think the market is overreacting a bit to Foluke Akinradewo-Gunderson’s return for Team USA. While she’s incredibly talented, I don’t think she makes the US better than China. I’ll take China to win Gold (+250) and throw a tiny bit on Japan to advance out of pool play. Those odds aren’t yet posted, but at +5000 to win Gold, they’ll be heavily on the plus-money side.