Over the next several weeks, we’ll be providing comprehensive betting previews for every major event ahead of the 2020 Summer Games in Tokyo, which will run from July 23 – August 8. This edition focuses on the tennis competition, which will be held July 24 – August 1 at the Ariake Tennis Park.

The Olympic tennis event has seen plenty of notable withdrawals – but fret not, fans, because both fields are still strong.

Novak Djokovic and Naomi Osaka headline a talented Olympic bracket, five years after Britain’s Andy Murray defended his gold medal while Monica Puig shocked the world en route to the women’s title. Djokovic is a hefty favorite on the men’s side, thanks at least in part to the unfortunate withdrawals of rivals Rafael Nadal and Roger Federer, while Osaka returns to action for the first time since pulling out of the French Open to give herself a mental health break.

With plenty of intriguing storylines on both sides of the draw, here’s a look at the Olympic tennis betting picture.

View the top deposit bonuses and promo codes for each sportsbook >> 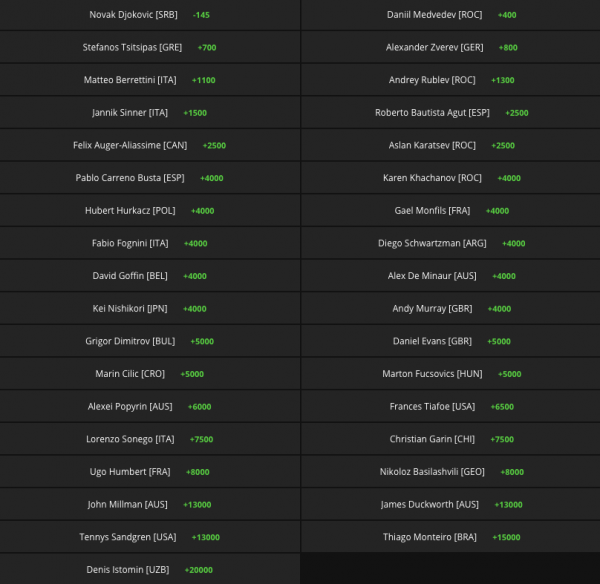 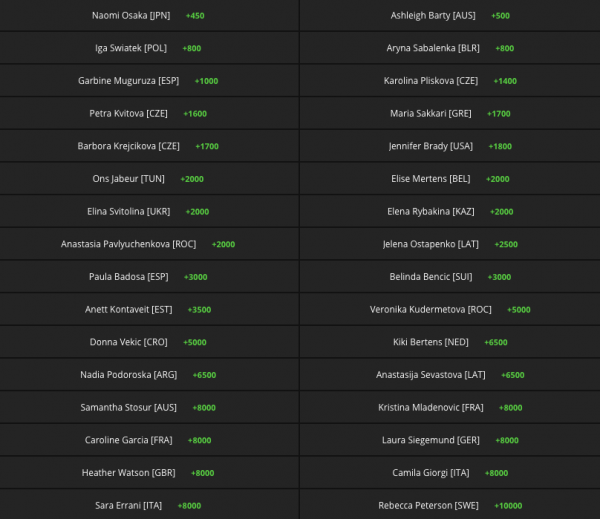 It’s tennis! If you haven’t already wagered on this sport, the Olympics isn’t a bad place to start. In addition to these outright tournament odds, you’ll have the chance to bet on individual matches – and the wagering options get even more granular than that, with bettors having the ability to bet on set winners, whether a specific set will go over or under a certain number of games, whether there will be a tiebreak and so much more.

There’s also value on both sides of the draw, depending on how you feel about the competitors. Djokovic is heavily favored, so the payout isn’t exactly noteworthy – but with few players in the field capable of keeping pace with him even for one set, this might actually be a good value bet. On the women’s side, things are rather wide open, so connecting on your outright play – no matter who it is – will yield a nice overall payout.

3 Things You Absolutely Need to Know

Since returning as a full medal sport in 1988 following a 64-year absence, the United States has dominated with 14 of a possible 34 gold-medal wins. For perspective, only one other country (Russia) has more than two gold medals in Olympic tennis competition.
There has been just one multi-gold-medal winner in either singles draw: Murray, who entered the 2016 tournament as the No. 2 seed and reigning Wimbledon champion and defeated Juan Martin del Potro in four sets in an entertaining final.
Venus and Serena Williams lead the way with three total gold medals apiece, each winning one in singles while combining for a pair in doubles; neither Williams sister will be competing in the 2020 Olympic tournament.

Novak Djokovic, Serbia (-145): Oddsmakers are supremely confident in the world’s No. 1 tennis player, and why not? Not only has Djokovic won 20 Grand Slam titles (including the first three of the 2021 season), he should be suitably motivated after getting knocked off by del Potro in the first round of the 2016 Olympic tournament, one of the most humbling defeats on his resume. An Olympic gold would be the perfect capper on one of the greatest careers in tennis history.

Daniil Medvedev, Russian Olympic Committee (+400): If there’s any player in the men’s draw capable of making things difficult for The Joker, it’s this guy. Medvedev has three victories in eight all-time matches vs. Djokovic, with each of those wins coming in their last five encounters. Djokovic had little trouble with the Russian star in a straight-sets Australian Open win in February, but Medvedev clearly has the goods to compete.

Felix Auger-Aliassime, Canada (+2500): Auger-Aliassime won’t turn 21 until Aug. 8, but he’s already on the fast track to greatness. The 15th-ranked player in the world is a respectable 24-14 on the season and reached the quarter-finals at Wimbledon, his third straight appearance in a final eight. He’s still looking for his first career ATP Tour title, but he has looked sensational in recent months and has never faced Djokovic (which might actually work in his favor).

Roberto Bautista Agut, Spain (+2500): Bautista Agut is ranked right behind Auger-Aliassime, but might actually have a better chance at winning gold in Tokyo. While his 2021 record is slightly worse (23-16), he has reached the final four on four occasions this season (including a pair of finals appearances) and has three career victories over Djokovic on his resume. He’s one of the best live underdog plays in the men’s draw.

Kei Nishikori, Japan (+4000): Hometown hero alert! It has been a difficult year for the former world No. 4, who has just one ATP Tour title since 2016 and is barely above the .500 mark for the 2021 season. But one of his 12 career championships came on home soil nine years ago, so perhaps he’ll draw inspiration from that. He also has a pair of wins over Djokovic in his career, though the most recent one came at the 2014 U.S. Open.

Frances Tiafoe, U.S. (+6500): Tiafoe finds himself in a similar situation as Nishikori, having struggled to a close-to-.500 record in 2021 and having gone a long time without winning a title (Tiafoe’s one and only victory came in 2018). But to his credit, the 23-year-old American played Djokovic tough in their only previous meeting, taking the world’s top player to four sets in the Round of 64 at the Australian Open. He’s talented and could make noise.

Naomi Okaka, Japan (+450): Everything is in place for Osaka to cash in this wager. She’s well-rested (and hopefully feeling better overall), will have the major advantage of playing on home soil, and is still one of the top players in the world despite her hiatus. She already has seven WTA Tour singles titles in the bank, and this tournament is one of the most meaningful events she will have played in over her career. She’s the player to beat here.

Ashleigh Barty, Australia (+500): The affable Australian comes in with plenty of momentum after securing her first Wimbledon title earlier this month. She’s an incredible 35-6 on the season, and her 72-percent career success rate on the hardcourt is among the best of any active women’s player. She even has a 2-2 record against Osaka, so she won’t be intimidated at the prospect of facing the local favorite in hostile territory (despite the lack of fans).

Petra Kvitova, Czech Republic (+1600): She barely qualifies as an “underdog” play as the No. 7 favorite in the betting odds, but she is too good a price not to include here. While she has struggled in the Grand Slam tournaments this year (failing to reach the third round in any of them), she’s the defending Olympic bronze medalist and is a solid 5-5 lifetime vs. Barty (though she’s 0-2 vs. Osaka). It’ll be a tough row to hoe, but Kvitova should be motivated here.

Elina Svitolina, Ukraine (+2000): She might be the most talented player in the world without a Grand Slam title – but Olympic gold would be a sensational consolation for the 26-year-old star. She has a commendable 13-6 hardcourt record on the season and is a combined 8-6 in her career vs. Osaka and Barty, making her the kind of giant-killing threat that could lead faithful bettors to a major payday.

Veronika Kudermetova, Russian Olympic Committee (+5000): A good longshot play in the women’s draw is hard to come by – but Kudermetova is worth a look. She’s in the midst of a breakout season, boasting a 26-15 mark with a victory at the Charleston Open in April, coming on the heels of a finals appearance in Abu Dhabi in January. She’s also a respectable 14-20 against top-10 players in her career, so an upset in Tokyo isn’t out of the question.