Over the next several weeks, we’ll be providing comprehensive betting previews for every major event ahead of the 2020 Summer Games in Tokyo, which will run from July 23 – August 8. This edition focuses on the baseball competition, which will be held July 28 – August 7 at Yokohama Stadium and Fukushima Azuma Stadium.

For the first time since 2008, baseball will return to the Olympic Games this summer. Fans will be treated to a six-team tournament beginning on July 27 with a matchup between the Dominican Republic and Japan.

The Japanese are favored to win gold at these Olympics. However, the tournament’s relatively short, modified double-elimination structure comes with no margin for error. As a result, the gold medal could go to the streakiest team, not the best one. That creates an opening for sports bettors to find value.

Group B
Israel vs. South Korea

July 30
Group A
Japan vs. Mexico

Group B
United States vs. Israel

If you’re an analytics-driven baseball bettor, you’ll have to adapt to find value in this tournament. Most of these teams haven’t played each other recently, and if they have, they probably did so with a different-looking roster. Also, the short nature of the tournament means regression can’t save players who fall victim to a cold spell, and it won’t hurt those who get hot, either.

So while you can’t count on the law of large numbers, you can try to outsmart the sportsbooks. They are working with the same limited set of information as you are, after all. That challenge is my favorite justification for betting on Olympic baseball. Oh, and the market discrepancies in betting lines help, too.

5 Things You Absolutely Need to Know

1. Baseball Isn’t An Every-Olympic Sport
Baseball doesn’t have the same global appeal as other big-name Olympic sports like soccer and basketball. As a result, the event hasn’t been featured at every Olympics. We last saw baseball at the 2008 Beijing Olympics, which capped a five-game streak of appearances for the sport. Baseball had appeared in a few Olympics before 1992, but it was only a demonstration or exhibition sport at those games.

Cuba leads all countries in gold medals with three (1992, 1996, and 2004), but they did not qualify for the Tokyo Olympics. Only two other countries have ever won gold, the United States (2000) and South Korea (2008). Cuba also leads in the overall medal count with five, while the United States and Japan rank second with three. None of the other qualifying teams have won a medal, and the three countries (Dominican Republic, Israel, Mexico) have only one Olympic appearance in baseball between them.

2. NPB and KBO Players Can Play — But Not MLB Players
In 1992 and 1996, the International Olympic Committee only permitted amateurs to play in the Olympics. Since then, they’ve changed the rules, but Major League Baseball does not allow players on 40-man rosters to compete. As a result, most Olympic rosters are composed of minor leaguers and international players. That gives a slight edge to Japan and South Korea.

3. National Team Rosters Change Frequently
Unlike soccer and basketball, the national teams that took the field at various Olympic qualifiers will look quite different from those we’ll see compete for a medal. Two factors contribute to that phenomenon: the MLB’s rules on who can play and the lower profile of international baseball competition.

The United States’ Luke Williams illustrates this point excellently. Williams excelled in the Americas Qualifier Event held earlier this summer, helping Team USA secure an Olympic bid and earning him the nickname “Captain America.” But three days after the Olympic qualifier ended, the Philadelphia Phillies called him up to their 40-man roster, and he hit a walk-off home run in his first-ever start.

4. Tournament Structure
Six teams have qualified for this year’s tournament, and they’ve been split into two groups of three. Each team will play the other two squads in the grouping. Once group play has concluded, the two last-place teams will play each other, and the winner of that game will advance to knockout play. The loser will go home.

Unlike other sports, baseball knockouts will follow a modified double-elimination format. They’re also seeded differently, as the two second-place and two first-place teams will play each other in the first round of knockout play. Those teams may meet again in the gold medal game, although the loser of the first matchup will have played an extra match. 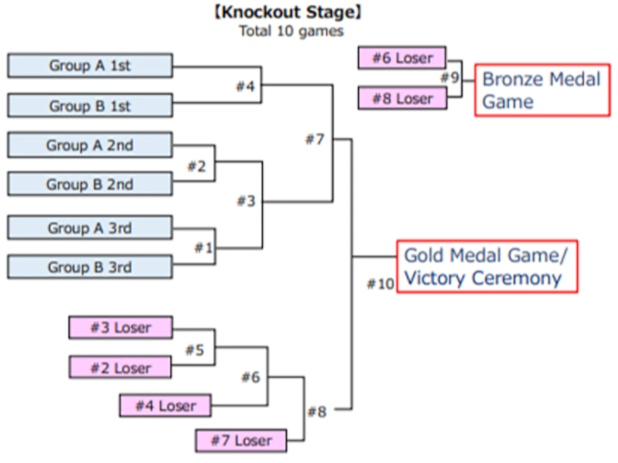 5. Team-by-Team Grouping
To determine who benefits from the tournament structure, let’s take a look at the grouping assignments.

The groupings appear relatively balanced. Japan is a clear favorite to win Group A, but neither the Dominican Republic nor Mexico is an obvious lock for second place. In contrast, Group B has no clear favorite. That division will come down to the group-stage matchup between the United States and South Korea. Israel should give both squads a spirited fight, but they lack the depth to warrant serious consideration as anything more than the third-ranked team.

As a result of these groupings, Japan should have an edge entering knockout play as long as they sweep Mexico and the Dominican Republic. That makes them the safest bet to win gold. The fact that the United States and South Korea are in the same division means that we should see at least one of them on the podium, but no major sportsbooks are currently offering odds on anything but the gold-medal race.

Betting outlook: Japan, the first-place team in WBSC’s world rankings and the tournament host, should win its first-ever gold medal on its home turf. They have the most talented roster at these Olympic Games, and unlike several squads, they have a world-class pitching staff. The fact that this line sits at just +110 at BetMGM and FD Sportsbook is a massive vote of confidence in the Japanese national team. You’re obviously better off taking Japan through DK Sportsbook, and you should try to do so soon before DraftKings adjusts their line to be closer to the rest of the market.

Betting outlook: The Mexican national team is currently in quarantine after pitchers Sammy Solis and Hector Velázquez tested positive for COVID-19. That development has canceled practices and leaves them shorthanded on the mound. While they have a former All-Star in Adrian González to anchor their batting order, Mexico doesn’t have an easy path to the podium. This pre-tournament debacle may doom them to a third-place finish in Group A.

Betting outlook: The Dominican Republic enters these games with a batting order that features two former MLB All-Stars, Bautista and Cabrera. I expect their offense to fare quite well, especially with elite prospect Julio Rodríguez also on the roster. Unfortunately, this team probably lacks the pitching talent needed to make a run at the gold medal. Their pitchers have a combined 16-17 record at the MLB level, although six of those wins belong to relief pitcher Darío Álvarez. I expect this roster to finish somewhere between third and fifth.

Betting outlook: I’m very excited to see how well Baek-Ho Kang plays at these games. I mentioned it above, but the 21-year-old’s 1.072 OPS in KBO play this season is phenomenal, and he could power this offense to a gold-medal run. However, South Korea lacks Japan’s pitching talent, and they don’t have the heavy MLB-veteran presence of Team USA. Of their 11-man pitching staff, five players are 25 or younger. They have only two left-handed pitchers, and one of them, Eui-lee Lee, is just 19 years old. While South Korea ranks as the second-best of the qualifying squads in WBSC’s world rankings, most sportsbooks have given them the third-longest odds. If you’re looking to bet against Japan, it’s worth taking South Korea at either FD Sportsbook or BetMGM, depending on what’s legal in your state.

Betting outlook: In the 2008 Olympics, we got a taste of some future MLB All-Stars in Stephen Strausburg, Dexter Fowler, and Jake Arietta. We’ve got a good mix of talented prospects and veteran free agents on this roster, too, and they could give Japan a fight for the gold medal with their loaded pitching staff. That said, a loss to South Korea during the group stage could jeopardize Team USA’s chances of even having the chance to do so. If you’re betting against Japan, I’d rather take South Korea. However, Team USA’s line of +350 at DK Sportsbook is a decent value.

Betting outlook: Israel is the only qualifying team outside of the top-10 in WBSC’s world rankings — they rank just 24th. But their performance at the Olympic qualifiers tells a different story: Israel took down No. 21 Spain, No. 9 Netherlands, No. 17 Italy, and No. 22 South Africa to get here. Israel could make some noise and surprise a team or two at these Olympics, but they don’t have a realistic path to the gold medal, especially since they’ll have to take out either No. 3 South Korea or No. 4 United States to finish group play in a better spot than third.

Isaiah Sirois is a featured writer at BettingPros. For more from Isaiah, check out his archive and follow him @is_sirois.